The Pink City of Jaipur has held a rather important position in the pages of history, a reflection of which is still visible in the walled part of the old city. There is the residential palace of the royal family, the Hawa Mahal, and the Jantar Mantar. On these very streets of the old city of Jaipur is the shop where the journey of KGK Group started over a century ago. A journey that has taken KGK group to newer heights in the field of Gems and Jewellery and to newer avenues around the world.

Today, KGK Group is headquartered in Hong Kong, has a 12,000 member team, and is active on 5 continents of the world. Yet, the humble beginnings of a global conglomerate started with the same morals and values that still motivate its working after 115 years.

As a tribute to the amazing city of Jaipur, the KGK Group has helped transform the beautiful city of Jaipur and brought its aesthetics into the limelight, making the world notice it as well.

This blog is all about the story of how Jaipur and KGK Group have stayed linked to each other over all these years, and how KGK Group continues to pay its tributes to the grand Pink City of India.

The Story of KGK Group

The father figure of KGK Group today, Shri Navrattan Kothari is the third generation of the family to have stepped into the business. It all started with his grandfather, the late Shri Keshrimalji Kothari, who in 1905 started trading coloured gemstones from Rangoon, Burma (now Myanmar), and sold them in Jaipur. These include the famous Burmese Rubies, Sapphires, and emeralds. From there on, the business grew to cover more and more ground in the country, with Keshrimalji’s son, Shri Ghisilal Kothari joined the business. 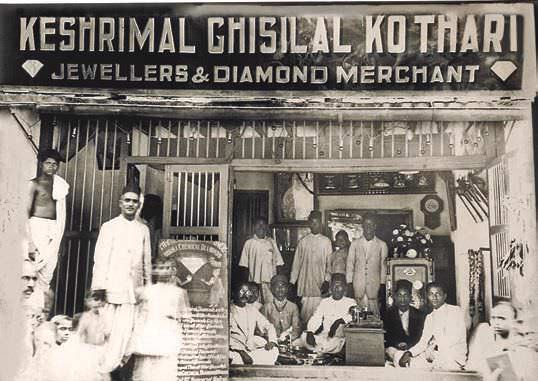 In the year 1960, Shri Navrattan Kothari joined his father and grandfather’s venture KGK Group (named after the founding members of the family business). He brought the business of diamond trading under his fold, moved the headquarter of KGK Group to Hong Kong and then took on the world.

Operations were established in the USA, China, Thailand, and Angola. Today, after about 115 years, KGK Group happens to be one of 84 sightholders for De Beers, the only one from Rajasthan, has the status of being a Rio Tinto Select Diamantaire. All of this international prestige and global reach of business, and the Kothari family still maintains a facility, a retail outlet, and a permanent residence in Jaipur. But that’s not the only connection that they hold with the city.

Giving Back to Jaipur

Alongside this, the KGK Group has been recognised for its efforts and brilliance by a number of awards and accolades, year after year. However, the centrepiece of these recognitions has to be the prestigious lifetime award given to Shri Navrattan Kothari by the JNA Awards. A recognition that talks about the journey of more than 60 years of a Man’s commitment to his birthplace, to his ancestors, and to his business.

As an ode to the heritage of the city that continues to inspire them, KGK Group undertook the task of restoring the most famous monument of Jaipur, the Jal Mahal. With the help of architects, engineers, and art historians from around the world, majestic Jal Mahal was restored to its former glory by the efforts of the KGK Group. It continues to be a beacon of beauty and a centre of attraction for local and international tourists who continue to pour into Jaipur to see its beauty.

“There are no shortcuts to success. Stay committed, and success will follow”, these are the inspiring words of Shri Navrattan Kothari, a lesson that he has lived through. His commitment to Jaipur and his family has brought immense amounts of success for him. As one of the top 10 jewellery manufacturers in the world, KGK Group has remained true to its values, always connected to its roots. Even in the time of this crisis, the Group stands proud with all of its members around the world.
Posted in Blog
Group websites
KGK Jewellery Manufacturing (Thailand) Limited
KGK Realty
Entice Martin Flyer Gregg Ruth
error: